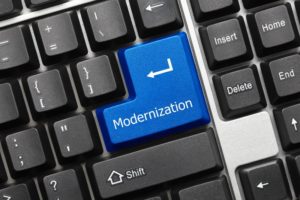 According to NextGov, Representative Will Hurd (R-Texas) will reintroduce the Modernizing Government Technology (MGT) Act this week. Hurd, with Representative Gerry Connolly (D-Virginia), originally sponsored MGT in September 2016 to tackle the Federal Government’s aging IT infrastructure. The previous administration had proposed a $3.1 billion IT Modernization Fund to address the fact that up to 90% of agency IT budgets go to legacy system sustainment. The Office of Science and Technology Policy issued an exit memo (no longer available on the White House website) with 10 actions to address technology challenges. It will be interesting to see whether the new bill offers specific implementation action items. Last year, the House passed the MGT Act, but time ran out and it never passed the Senate. At the time, the Congressional Budget Office (CBO) estimated that implementation would cost $9 billion from 2017–2021. The new bill is likely to create working IT … END_OF_DOCUMENT_TOKEN_TO_BE_REPLACED 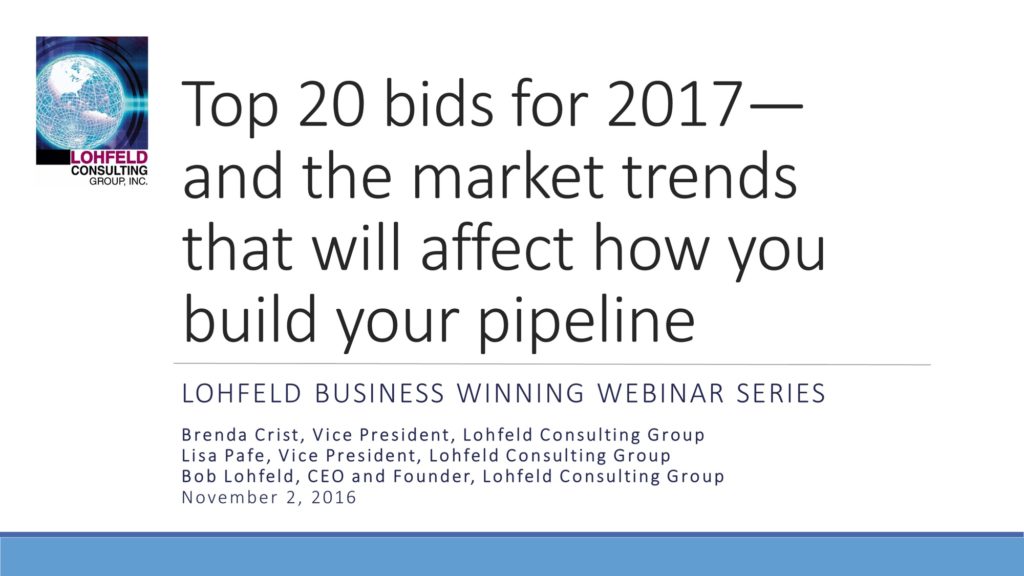 We received a lot of audience questions during our recent Top 20 bids for 2017 webinar. Here is part 3 of our Q&A. Question: With more and more work going to task orders that have less visibility, how can you find out more about what task orders to bid? Brenda Crist’s Answer: That’s a great question, and it’s really tough too because I use most all of the government research services and it’s sometimes hard to find out, although GovWin does provide some of the old RFPs. So, if you don’t have that service, go to the contracting officer and go through your old emails. You have to find that old RFP. Then you can start doing your traditional capture on it. That is definitely hard.   Question: Everyone is going after these high-profile bids. How can we make our proposals stand out? Lisa Pafe’s Answer: What we recommend to … END_OF_DOCUMENT_TOKEN_TO_BE_REPLACED

We received a lot of audience questions during our recent Top 20 bids for 2017 webinar. Here is part 2 of our Q&A. Question: What is the state of mergers and acquisitions and what does this mean for the competitive environment? Bob Lohfeld’s Answer: Companies go through this merger and acquisition ritual basically for two purposes. One is to realign their business strategy, and the other is to buy backlog. I think over the last several years we’ve really seen a significant realignment in the market based on strategy. The first one to do it was SAIC splitting off part of their business for organizational conflict of interest reasons. The neatest deal this year I thought was Lockheed Martin’s deal to spin off IS&GS. Everybody says it was because Lockheed Martin wanted to get out of the low-price business, but my take on it was they really wanted to buy … END_OF_DOCUMENT_TOKEN_TO_BE_REPLACED

We received a lot of audience questions during our recent Top 20 bids for 2017 webinar. Here is part 1 of our Q&A. Question: Although a number of government procurement leads are stating their acquisition strategy will be based on “best value,” they list both LPTA and technology/price trade-off as viable decision tools. When technical proposal evaluators are not able to “significantly” differentiate offers, contracting officers almost always default to LPTA. So, when do you think real best value awards will be “here to stay”? Bob Lohfeld’s Answer: In my opinion, best value tradeoff procurements need two things to occur before they will be “here to stay”. First, we have to have a rising federal budget. In times of sequestration and budget reductions, agencies simply don’t have enough money to buy what they need and instead default to buying what is cheap. Second, agencies have to realize that buying on … END_OF_DOCUMENT_TOKEN_TO_BE_REPLACED