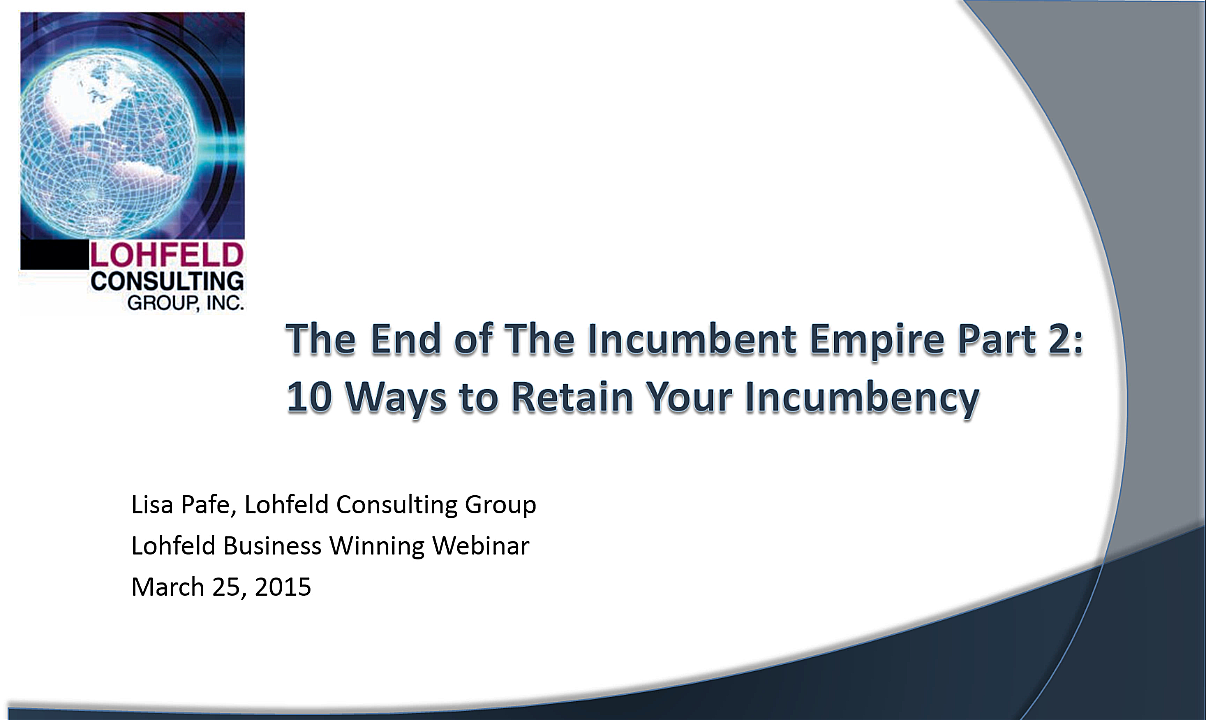 In Part 1 of her webinar, Lisa Pafe identified 10 ways to unseat the incumbent. Now in Part 2, Lisa focuses on how to retain your incumbency in the highly competitive Federal Government market. While industry studies show that incumbents now have approximately the same win rate on rebids as non-incumbents, the fact remains that the best informed wins—and the incumbent is still the best informed. Learn how to leverage your incumbency from day one of contract award and protect your work from challengers. This webinar provides 10 proven best practices to keep your incumbency intact in today’s changing environment. Click to watch the Part 2 webinar replay and download the presentation and research brief. (Watch Part 1 of The End of the Incumbent Empire and download the presentation.) Your speaker: Lisa Pafe, CPP APMP, Principal Consultant with Lohfeld Consulting Group Lisa Pafe brings 25 years’ experience in management consulting, marketing, … END_OF_DOCUMENT_TOKEN_TO_BE_REPLACED 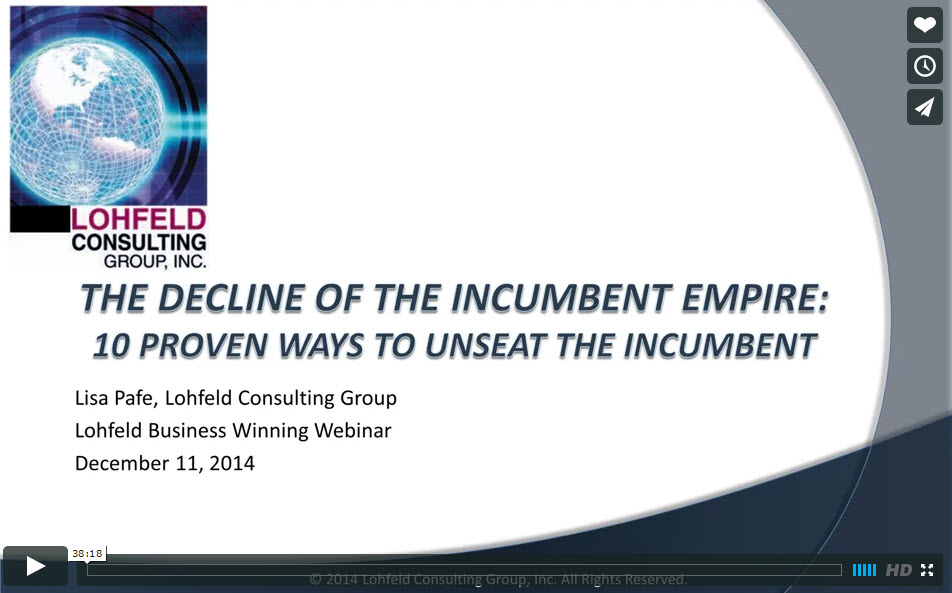 In the past several years, incumbents have lost their advantage in the Federal Government market. Industry studies show that incumbent contractors now have approximately the same win rate on rebids as non-incumbents. Rapid technological change, as well as fiscal constraints, mean that customers are more willing to consider alternatives. Still, winning a bid against an incumbent contractor is a challenge because best informed wins, and the incumbent is still the best informed. In this webinar, Lisa Pafe, CPP APMP and Lohfeld Consulting Group Principal Consultant, provides 10 proven best practices to create a competitive edge over the incumbent in today’s changing environment. Click to watch the webinar replay and download the presentation and research brief. (Look for Part 2 of The End of the Incumbent Empire: Remaining as Incumbent in the next couple of months.) Your speaker: Lisa Pafe, CPP APMP, Principal Consultant with Lohfeld Consulting Group Lisa Pafe brings 25 years’ … END_OF_DOCUMENT_TOKEN_TO_BE_REPLACED

Recently, Bloomberg BNA published a report advising that “contractors must adapt quickly to a shrinking government market by revamping their capture processes and forming concrete plans to make themselves more competitive, according to Bob Lohfeld, chief executive officer and founder of Lohfeld Consulting Group.” According to Bob, “Companies that don’t change their tactics to compete in the new budget-constrained government market will give way to others who are adapting to these new challenges.” He further states, “As federal markets shrink, those firms with a defined, repeatable, and well-managed capture process will generally compete better than those who don’t have this process in place.” Read the full report: Bloomberg Capture Management Report 2013.10.15